Task：Information about the preferred leisure activities of Australian children. 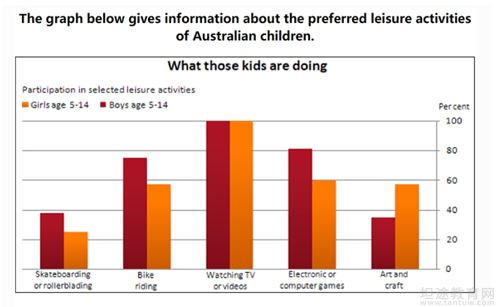 The bar chart shows the favored leisure activities of Australian boys and girls age 5-14. 5 aspects can be divided into 3 groups.

The first group includes Watching TV or videos, which was the most popular leisure activity in all. Specifically, numbers of boys and girls both reach the same level at 100%, which means TVs and Videos are always given the top priority for amusement and universally favored by every child.

The second group consists of Skateboarding, Bike riding and Electronic or Computer games, all of which attract more boys than girls. For example, in the level of Skateboarding where the lowest percentage of both genders was found, the number of boys accounted for little less than 30%, 10% more than that of girls. Similarly, regarding Computer games, the number of boys enjoying them was over 80%, much higher than girls.

The rest one which is preferred by girls, namely Art and Craft, belongs to the third group. The data indicates that the proportion of girls reached nearly 60%, almost twice of that of boys.

In conclusion, the percentage between two genders varies a lot in different kinds of leisure activities, and interestingly, all children like watching TVs and Videos most.
来源于网络，由雷哥雅思整理编辑。